Just received a call from customer on problem 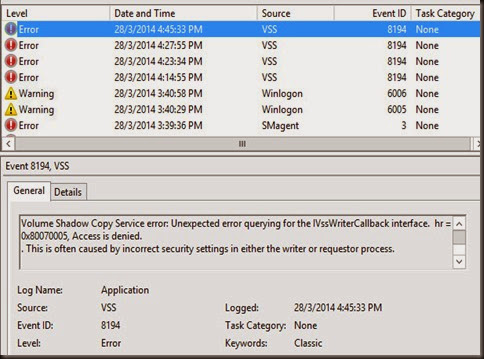 b. Try backup using Windows Backup. Guess what? It is still failed.

Then it is not DPM issue. So the ball pass back to VSS.

Without further due, I’m decided to use diskshadow tool which available part of Windows Server 2008 and Windows Server 2012. It is a tool that exposes the functionality offered by the volume shadow copy services (VSS). It only list 2 providers. I did a comparison on 2nd node. The 2nd node consists of 4 provider. So that’s mean missing two provider in the registry. You can check from here:-Under

a. Access to 2nd node registry, export the 2 missing provider

b. Import 2 missing VSS provider into the 1st node registry.

Here is the outcome of the export registry value:-

a. Test using DPM to start backup. Now I was able to backup the virtual machine without any problem.

Case closed…Some how the VSS provider is missing and causing the backup to failed.