For the pass few days, i have been busy attending training. Guess what?

It's Citrix XenDesktop 5 which announced at Citrix Synergy 2010 Berlin (last week) which will ship by the end of the year 2010. Among several selected people, we had been train to use the latest Citrix. Since it is not yet release as production, i would not share the step by step instruction. However a high overview of the class setup during the training.

Here is our setup environment:- 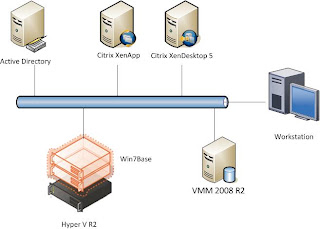 A machine installed with Hyper V R2 with the following Virtual Machine:-

The entire environment is in domain environment and a DHCP is setup inside the Active Directory. Meanwhile, Citrix deployment is using Quick Deploy.

You need to install VMM Administrator Console into this VM as well before establish a connection.

The following is setting that you to perform:-

On the Win7Base VM, VDA agent is installed. Once done, offline the VM.

DDC will use VMM to create snapshot and multiple pool images.

Lastly, not to forget a brand new web based helpdesk console called "Desktop Director". Now, you can delegate different roles to the user based on management tasks. These roles are designed to fit with the typical IT structure in an enterprise. For example, a user can be granted Read Only access to the XenDesktop site and use the Desktop Director at the Help Desk.

XenApp VM
Besides than Citrix XenApp, you need to install RDS Session Host. XenApp allow you to publish application into Citrix Web Access and inside the VM. The concept is similar as RD Session Host and RD Web Access.

To access the VDI and XenApp application, you can use Web browser.The web interface has changed to white background.

As a conclusion, a lot of cool stuff in Citrix XenDesktop 5 and XenApp during our lab environment. Hope to share more but it's still too soon as currently it is in beta stage.