I have encountered microphone issue when performing Proof of Concept (POC) to a customer. Here is the scenario that i would like to share.

Scenario:
When you access VDI Virtual Machine running on Windows XP and Windows 7, you will be able to get audio from the machine that you use to access but no microphone detected. Please refer to below figure (on the Recording tab): 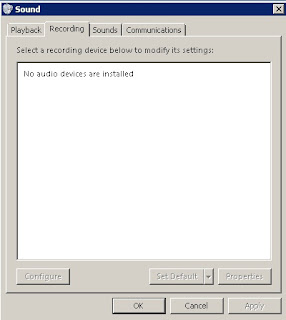 By default, Windows 7 VM running in Hyper V does not have Sound driver. You will get audio redirection from the client computer. Same scenario happen to Windows XP Professional.

Now why still no microphone ?

a) No Audio Redirection Recording for Windows XP VM. Please refer to statement mentioned in http://support.microsoft.com/kb/969084 .Even with RDC 7.0 install into the VM, this feature will not available to Windows XP VM as XP does not support audio recording redirection.

c)By default, remote audio recording is disable on rdp file. Make sure you select "Record from this computer" or modify the rdp file to include 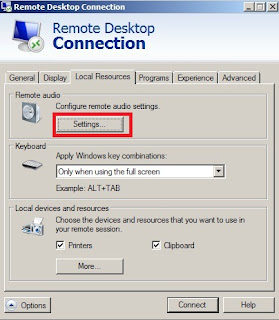 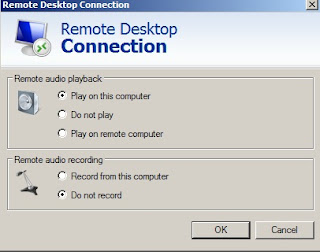 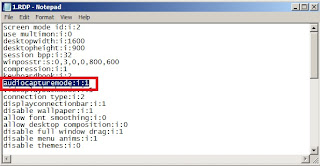 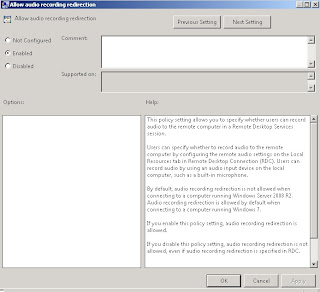 d) On the Windows 7 VM, modify the registry
HKLM\SYSTEM\CurrentControlSet\Control\Terminal Server\WinStations\RDP-Tcp

fDisableAudioCapture REG_DWORD to 0. If you're running Windows Server 2008 R2 domain controller, you can use group policy to replace the registry value in Computer Configuration |Preferences | Windows Settings | Registry. (refer to below figure). For more detail, please refer to http://support.microsoft.com/?kbid=2020918 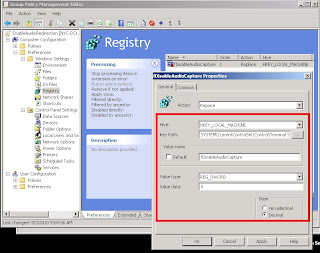 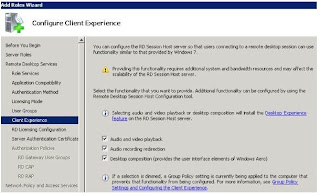 At this moment, here is my test result after above configuration:-

Here is some additional finding on connectivity and feature support: http://blogs.msdn.com/b/rds/archive/2009/08/21/remote-desktop-connection-7-for-windows-7-windows-xp-windows-vista.aspx

Will update again once i rerun multiple test. Stay Tuned.
Posted by Lai Yoong Seng at 3:14 AM